I was lucky enough to spend a great deal of time with my grandfather. He died an old man, when I was in my late 20s and had already left my hometown to live in Brussels. By that time I was seeing him less and less and our conversation was growing thinner.  As a young man living abroad, I was eager to find my place in the world and I had little time to explain myself and my life to a man that, in my mind, was not equipped to understand it.

Needless to say, I would now be more than happy to show my grandpa the man I became and get his opinion on the world I live in. But after all, figuring out a mistake once it’s too late has always been one of life’s greatest ironies.

My childhood is however punctuated with precious memories of him. He would pick me up at school, play with me on lazy afternoons, take me to the sea on hot summer days and shower me in gifts. He seemed always eager to spend time with me, which is remarkable considering that he was a very solitary person, almost entirely removed from the world.

This is where my curiosity for him began. Although my kid’s mind could not rationalise it, I understood that, contrary to other people, my grandpa was weighed down by something difficult to explain, a secret that was best kept in the dark.

His love for me, I could feel it, was pure and fearless. If necessary, he would have given his life for me at a moment’s notice, without second thoughts. Common wisdom dictates that you should always expect this from grandparents, or at least from parents. But the thing is that, in his case, it was actually true. And yet, regardless of his bravery, he felt as if he was always a second away from withdrawing inside himself, constantly locked in a battle to stay in touch with the outside world. Sometimes, when walking down the street, he would squeeze my hand so hard that it would hurt, grasping it like his last anchor of stability.

Then, when I grew a bit older, I started hearing about the second world war. When he was younger grandpa was a soldier, they said. Grandpa spent months fighting. Grandpa was shooting people. Grandpa, probably, had to kill people.

In my young mind, it all sounded a bit abstract. Something that I was probably supposed to fear or be careful about, but that was impossible to compute. Also because when asked about the war, he would always make light of it. I grew up hearing his numerous war stories, sitting on his knees, but they always sounded like a distant, romantic and ultimately harmless adventure. They fascinated me because there was no real danger in them, no real pain. Something also a kid could enjoy.

This was of course not true, as I found out years later, when, before leaving my home town for University, I asked him to write down his memories. I knew, by then, that he had fought with the Allies and I was proud of him risking his life to oppose fascism. He was a hero to me and I thought it would have been nice to preserve and possibly share his story, to keep it intact over the years. But my grandpa was growing older and weaker, his ability to face life and making sense of his fears and nightmares slowly withering away.

He refused to do it, and he looked ashamed when he did. I didn’t want to embarrass him, so I smiled to him and I left, his eyes following me.

I never asked him about it anymore, careful not to stir any pain. After leaving for University, I seldom saw him or talked to him. We spoke for the last time a few years later on the phone, his voice broken by tears, just after a heart attack forced him to the hospital. Despite the doctors’ optimism, he knew he didn’t have much time left and wanted to say goodbye. The next day, a second heart attack took his life.

This is my attempt to tell his story. 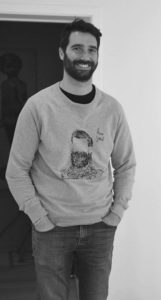